In 2017 there were nearly 1,000 unfilled pilot jobs in the US Air Force. The 435th Flying Training Squadron, nicknamed ‘Deadly Black Eagles’, at Randolph Air Force Base, Texas, is one of the units that are working hard to reduce the number of vacant pilot slots. In 2017, the unit trained 16% more students than in 2016, all destined to become fighter pilots or combat system officers. The 435th is part of the 12th Flying Training Wing. The wing consists of five FTSs: 99th (T-1A pilot instructor training), 435th (Introduction to fighter fundamentals), 558th (remotely-piloted aircraft training program), 559th (T-6A pilot instructor training) and the 560th (T-38C pilot instructor training).

Introduction to fighter fundamentals
After completing Undergraduate Pilot Training or Undergraduate Combat Systems Officer Training, graduates selected for a jet fighter assignment are posted to a Flying Training Squadron to go through an introduction to fighter fundamentals (IFF). The 435th is one three IFF squadrons in the US Air Force. The others are the 49th FS at Columbus AFB, Mississippi, and 88th FTS at Sheppard AFB, Texas. The mission of the 435th is focused on students becoming wingmen. The training is done in the T-38 Talon and takes about three months. After completion, the students will move to another training squadron for education on the fighter aircraft, they will eventually fly in the US Air Force; the A-10, F-15, F-16, F-22 or F-35.

T-38 Talon
The T-38 Talon, built by Northrop, is a two-seat, twinjet supersonic jet trainer. Its first flight was in 1959 and 50 years later the aircraft still plays a vital role in training pilots of several air forces. Most of the original T-38A variant aircraft of the US Air Force have been converted to the T-38C, to turn the jet into a modern jet, with Head-up Display, GPS and an Inertial Navigation System.

But many of the T-38 frames are so well-used nowadays that they are restricted in performing tight turns that modern fighters can make. Therefore, the US Air Force decided in 2018 to replace the Talon by a new trainer aircraft, designed by Boeing and Saab: the T-7A Red Hawk (originally called T-X). Initial Operation Capability for the T-7 is planned for 2023.

We published an article about the 435th FTS in the March 2018 issue of Air International. 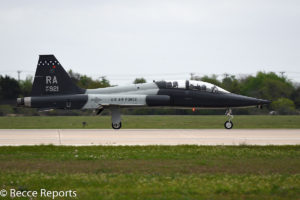