On 20 and 21 June 2014 the Royal Netherlands Air Force opened her gates for the public at Gilze-Rijen Airbase. Although the line-up was not as impressive as the 2013 edition at Volkel Airbase, the two-day event still draw 245.000 spectators. The crowds saw a variety of aircraft on the static display and watched the aerial skills of lots of aircraft during the airshow. Recce Reports was present during the arrival day of the participating aircraft that were dispatched by NATO and other air forces. In the afternoon some of them practiced for the airshow. Between them three F-16’s from Greece, Belgium and The Netherlands, and two Slovak MiG-29’s, that made great practice runs. Not only fighter aircraft were present, lot of nations also sent helicopters and transport aircraft. The Royal Navy came over with a Chipmunk and a brand new King Air.

Bleriot
Gilze-Rijen Airbase also celebrated its 100th anniversary. To commemorate this highlight, a replica of a Bleriot also took part in the show. The French Bleriot was hundred years ago, the first aircraft that used Molenheide airbase, the forerunner of today’s airbase

An article about this excercise was published in the July 2014 issue of Full Stop Magazine. 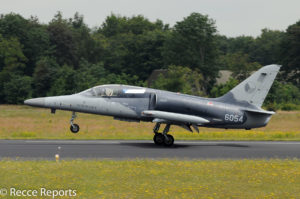