TLP 2005-3; Not the usual suspects at sunny Florennes AB

The Tactical Leadership Programme was founded in the late 19seventies. Its purpose was to join allied forces and train together in joint operations, but also to generate leaders for challenging multinational air defence and air strike missions. The TLP is a standalone organization based on a Memorandum of Understanding between the air forces of Belgium, Denmark, France, Germany, Greece, Italy, the Netherlands, Spain, the United Kingdom and the United States of America. During the years other nations have been invited as guests to participate.
The first TLP ever was held at Fürstenfeldbruck Air Base, Germany, in January 1978, but this first edition was strictly academic. The TLP moved to Jever AB, Germany, in September 1979 and the academic course was extended with a flying phase. When the TLP left Jever in 1988, 71 courses were held there and over 1900 aircrews were trained. Florennes AB in Belgium was appointed as the new homebase for the TLP, and hosted its first TLP in March 1989. The TLP stayed at Florennes until July 2009, when the exercise moved to Albacete, Spain, where weather conditions are far better and the aircrews have a large airspace structure to their usage.

TLP 2005-3
The first participants arrived on Friday 15 April and the last participants departed on Friday 13 May. This time the French-, German- and U.S. Air Force skipped the TLP, and the Italian Air Force only send 3 AMX’s. But with the usual suspects missing there was room for more rare participants. For example three Vipers from Portugal and four from Turkey. And a large Spanish delegation. Not only EF-18A’s and Mirage F.1M’s from the air force, but also EAV-8B+ Harriers from 9 Esc from the Spanish Navy. The last time the Navy Harriers participated at a TLP, was during the 1999-3 edition. A large Belgian and RAF participation and an unusual number of sunny days completed this edition of the TLP. 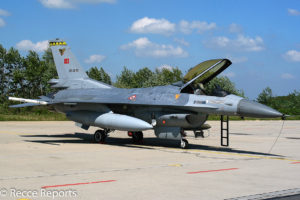