Navy Air Facility El Centro is located in the South-West of the United States of America, in the state of California, near the Mexican border. El Centro has no flying units of it’s own. Yet it is a very busy airbase because of flying activities from units using the realistic training opportunities in the vicinity of El Centro. There are wide ranges, where pilots can practice bombing, fire missiles and shoot their cannons. Combine that with good weather all year round, then you know why this is a popular spot for pilots of the U.S. Navy. After their missions, crews are debriefed at El Centro. In addition, El Centro, is the winter residence of the U.S. Navy demonstration team the Blue Angels. After training during the winter months, the annual open day at El Centro is traditionally the first public performance of the team in the new airshow season. Recce Reports was invited to the open house at 10 March 2012. We were able to watch up close the present day inventory of U.S. Navy aviation, like the F-18E/F Super Hornet, C-2A Greyhound and SH-60 rescue helicopter. The capability of these aircraft were also demonstrated during the airshow, with the performance of the Blue Angels as the highlight of the day.

An article about this Airshow was published in the October 2012 issue of AIM magazine. 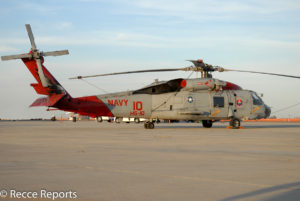